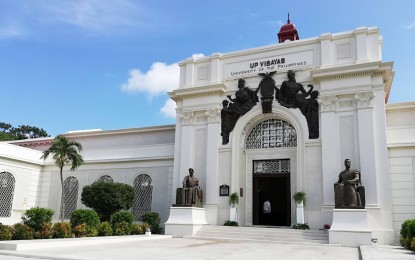 The UPV University Library was first established as early as April 1947, requested by the founding dean of U.P. Iloilo College (UPIC), Dr. Tomas S. Fonacier, in preparation for the opening of UPIC on July 1947, which was known today as the UPV College of Arts and Sciences (UPV-CAS).  As early as April 1947, Dean Fonacier requested a university library to help in preparation of the list of books for the college library, and at the same time, requested to nominate a librarian.  It was just only until about the beginning of the second semester when Mrs. Soledad Mandac-Eugenio was finally nominated and appointed.

The College Library was located in the former Municipal Court Room of Iloilo City.  It had then a maximum seating capacity of about one hundred students.  Behind the Court room, provisions were being made for book stacks with an estimated capacity of about 20,000 volumes of books.  The library’s initial collection was 522 volumes of books, 8 newspaper and 73 magazines.  In 1967, a mezzanine was built to accommodate more space for the students and in 1969, another room was offered to the library to provide additional space.  The court room and the Lozano Hall were utilized to the fullest.

As the college grew in terms of its academic programs, so did the library.  Improvements of the quarter was made through several re-arrangements of several desks and work areas.  Room 22 of the Main Building, a classroom then, was converted into a Technical Services Section in 1983 where new acquisitions were being received and processed.

From 1947 to 1971, the College Library also serviced the needs of the High School students.  It was in 1971 when the high school collection was transferred in a separate library quarter and a librarian was assigned to take care both collections and services.

On October 30, 1981, with the operationalization of the University of the Philippines Visayas (UPV) as an autonomous unit of the UP System, the College of Fisheries Library in Diliman became a unit of the UPV University Library.  An 800 sq. m.  split –level library museum was constructed in the new campus in Miagao, Iloilo.

In July 1987, the Brackish Aquaculture Center (BAC) Library in Leganes was re-organized in order to better serve the needs of the College of Fisheries Program in Iloilo.

The College of Fisheries Library in Miagao became operational in June 1988 and materials from Iloilo City and Diliman were gradually organized and transferred to Miagao, in time for the start of the classes.

At the end of 1989, The Main Library in Iloilo City was serving the needs of the College of Arts and Sciences (CAS).  School of Development Management (SDM), School of Technology and Environmental Resources (STER) and the Graduate School.  It was also the seat of the technical services for the entire UPV Libraries.